The Beginning of T dirte`

Hello there, I have had a number of nickname’s over the years, from Hell Tel to T Bone, Hippy, Hippy Bastard, Hip, even James Hunt for a while. T Dirte` is what most people call me these days but still known as Hip at work. If you have seen the film Joe Dirt, you may have some idea….anyway T Dirte` is the nickname that has stuck with me for now!

Since the age of 8. I wanted to be a rally driver! I can still remember been mesmerised while watching a rally on TV, seeing this MkI escort tearing up this gravel road, the back end dancing from one side to the other, leaping over jumps and bumps, drifting around sharp bends, with big Rocks, Ditches and Trees surrounding the dirt road, I was hooked and from then on new that I wanted to be a Rally Driver!!!

After leaving school aged 15. I went to college on a YTS (Youth Training Scheme), similar to a apprenticeship. I would do a week at college and then a week or 2 weeks at a garage, or something like that.

The 1st garage I was at was A&R Motors in Walthamstow. Here was were I started learning to fix cars. The garage dealt in prestige cars, Merc`s, BMW’s etc and there were a few Ferrari’s in for bodywork. I really liked working here but after a few months I would come home totally exhausted!! I had been stung by a wasp when working and thought it may be something to do with that?

Anyhow, shortly after been stung, coming home after work and feeling totally exhausted, I often wondered how people worked day in, day out and had the energy to do anything else when finished from a days work? After work I would do Weight Training which I had been doing for a few months but over the weeks I was getting weaker & weaker? and losing weight!

Apart from the weight loss, my vision was becoming more and more blurry. I had an incredible thirst, no matter how much I drank I wanted more. Nothing would quench my thirst. I was going for a p*** every 2 to 3 hours & at times every hour….all classic symptoms of diabetes, that I wasn’t aware of at the time!

A couple weeks later I thought I would walk home as it was a nice sunny afternoon and should of only been a 25min walk. I felt proper knackered by the half way point, had to keep stopping to rest up. When I got to the end of my road, it had taken me 40mins and I kept getting real bad cramps in my legs and nearly collapsed twice.

I now realised something was wrong. When i got home i just collapsed as I struggled to get in through the front door, legs all cramped up.

I was taken to my Doctors who took a quick blood test and started calling for an ambulance. She said I had Diabetes and my mum said she would take me to hospital instead. Dr said I should of seen her earlier and that another day or 2 and I would of been in a coma!

I spent Over a week in hospital, the 2nd day I was shown how to inject my self. I remember thinking this must be some new disease and didn’t realise i would have to spend the rest of my life taking daily injections.

I thought I dealt with it well, considering i was just 16 and starting out in life! After a few weeks and lots of big changes in my life, dealing with 2 injections a day, making sure I didn’t have any Hypos (Low blood sugars) which I hated but knew I had to just get on with it
and I wasn’t going to let it hold me back!

I Had to follow a strict diet, no sweets or eating when or what i wanted. These days managing diabetes is a lot easier then it was but it is still very tough to deal with, you can find more info here on diabetes!

Through determination & sticking to what I was told to do, eating & injecting at certain times, checking blood sugar levels regular and back to doing my weight training i began to feel like my old self with a lot more energy and starting to put weight back on.

When I went back to college over a month later, Brian my careers advisor suggested instead of carrying on with Mechanics that I do a cookery course! As it would be easier on my diabetes? No f’ing way, I told him I would stick with the mechanics, which he agreed to.

I was moved to another garage in Chingford. I was proper pissed off about this as the garage was a Yugo main dealer! Yugo’s were basically Fiat 127s in a different body which were built in Yugoslavia. 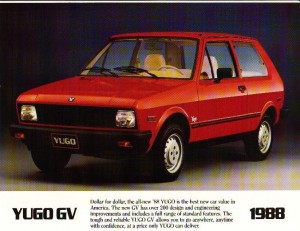 After a couple months I settled down and enjoyed working there as the boss`s Dave and Terry, mechanics Mark and Etra were real good to me. After a while Dave would give me an extra money (Yts only paid £27 per week) as he was impressed with my work.

I went on to pass my driving test the 1st time at the age of 17. Before I passed I had my 1st car, a rusty red MKI Escort, which I had big plans for. It was a bucket of shite to be honest but was still excited to have my 1st car. My first drive out with my mates Jason & Martin (Moose) we ended up in a ditch up in High Beach and had to do some pushing to get her out.

Shortly after I bought another MkI escort of my mate Moose. This was a 1300cc with a Weber Twin Choke carburettor, woohoo! Well it was pretty quick for its time! 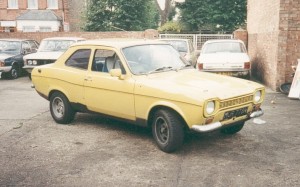 The first thing I done was Welded on 2 Cherry Bomb exhaust silencers which made it Proper loud, use to get pulled over a lot because of the noise. Cherry bombs where bought at Ripspeed in Tottenham, when it was Ripspeed not the Halfords Ripspeed, use to love going to Ripspeed or Burtons on a Saturday with my mates and all the other Boy Racers to buy or order parts. Check out the other cars that where in the car park.

My Boss Dave gave me a set of keys to the Yugo garage so that I could work on my MkI escort as he knew I was keen to prep it for Rallying. He also gave me a Sunday job on the petrol pumps, filling peoples cars with petrol like the old days, I would get £20 in tips some days on top of my other work which all helped me to buy the parts I needed to fix up my MkI. 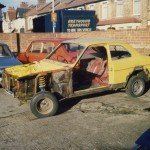 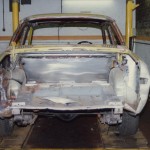 Chopping out the Rot 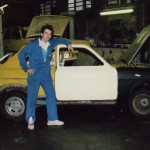 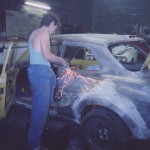 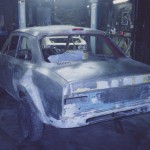 The owner, Terry sold the Yugo garage to New owners, Phil & Brian. They kept me and Dave on. Still a Yugo dealer but they got new sales men Pinky & Perky who Started selling American cars in the show room, which I was well pleased about. They had 2 Mach I Mustangs a Mach II, a massive Thunderbird, and a Maserati Powered Citreon that was called a Maserati. Also had Jenson Interceptor and the odd Ferrari and Porsche. I got to do work on some of these which I loved doing!

The new owners Phil & Brian said they would supply a Yugo and pay for my entries to do Rallying if I prepped the car and got my MSA Rally Licence. I was over the moon at this opportunity, well apart from the Yugo.

I sent of for the MSA application form to get my Licence but to my dismay at the time it stated that under no circumstances would a type 1 diabetic be eligible for a racing licence!! I seen my Diabetic specialist to write a letter but it wasn’t happening! Gutted!! My MkI was half way done but it put an end to my Rally career before it even got started. 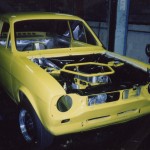 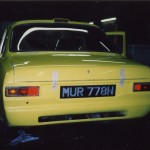 I carried on working with My MkI and finally got it finished. I was very pleased and proud of her but she sat quite high as I got all the suspension to Rally it. After a while I lowered it to give it a better handelling and stance for the road! 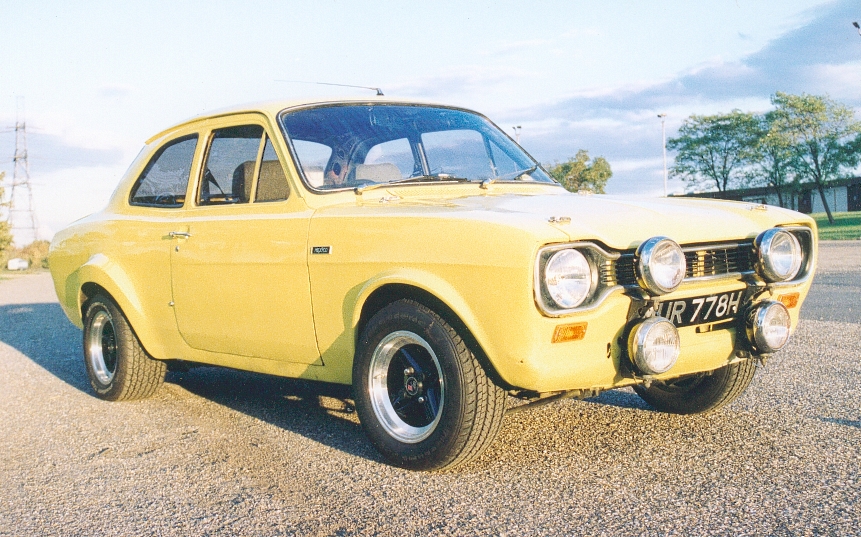 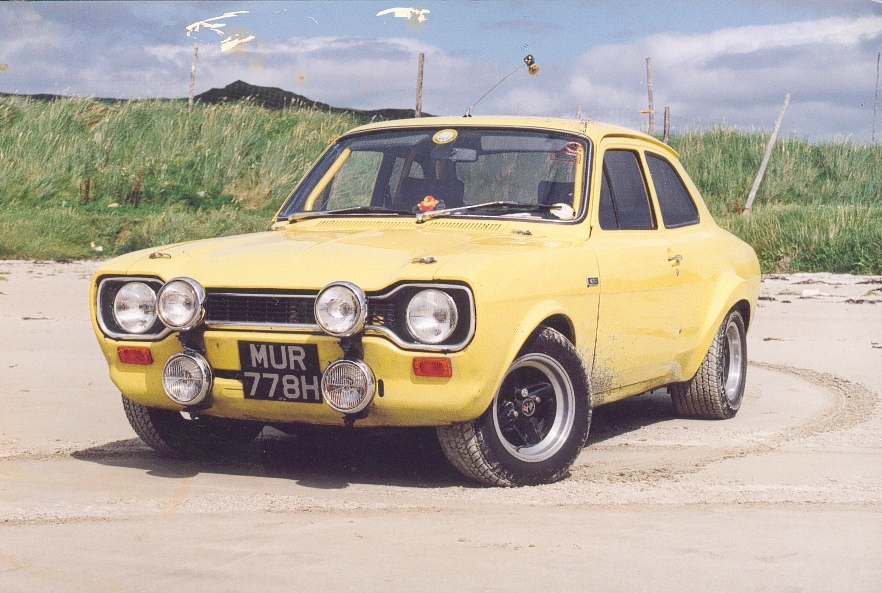 Finally the tarmac terrorist Mad Mex is on the road. Back then in the 90s, me and my mates would go cruising around London up the West End a lot. We would go to Lakeside which was a popular place for boy racers and High Beach most weekends.

Big M had a cousin down in Southend, where we would go most weekends in the summer. Before they put speed humps down by the sea front, you were guaranteed to see cars racing along, bikes pulling wheelies and cars doing burnouts and doughnuts but the police would put an end to that!

As the years went by we would go down to Kent, to a bar called Jolstens, where Big Phil worked as head bouncer. Phil would get us in for nothing and we had loads of laughs down there, there were fights near enough every time we went there, Women included!!

We also spent a lot of time around Epping and Ongar! Most nights we would get into races with somebody. Around this time there where loads of boy racers about with mkI, mkII Escorts, Capris, Cortinas, Minis!!

Wanna Do Some Drifting pt5