Arena Essex Drifting 2014, back for more drifting fun…… 1st bit of legal drifting this year. The 3.9 ratio Limited Slip Diff fitted, the Nardi imitation 350mm steering wheel fitted & Kenlowe elecy fan sorted. T dirte on route to the Arena with a full tank of Gogo juice, spotted another fellow drifter on his way with a Black e30 on his flat bed transit, thumbs up mate!

Is Marsh also on route in the SL55 AMG V8 Merc? I f`ing hope not…….Parked up at the Tavern & ran up stairs to get signed in & get my wristband. Run back down to the Beamer & of to the pits to tape the lights up! 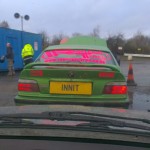 Quick look around the pits & no JT or Marsh, looking good apart from the big queue of drifters. Got in line & set up the GoPro, not long now…….

The Beamer felt a lot easier to control with Lsd, had little or no understeer and it was not as snatchy as the welded diff, felt a lot smoother.

The smaller steering wheel, with 2 inch deep dish, took a bit of getting use to but was a lot better then the BMW Tech 1 steering wheel that I had before, that was like a f`ing bus wheel. With the smaller wheel I had a lot more room and wouldn’t bang my legs & catch the indicator and wiper arm stalks like before.

I was feeling real tired & rough, think I’m coming down with the man flu…..but was enjoying the drifting, pity there were so many cars. After the 1st run the line to queue now had 2 lanes. A few people were taking the piss cutting in line but then others were letting me jump a few cars and a whole bunch at one point so they could drift with their mates, which was fair enough, so it all worked out ok.

King of the Ring winner Danny Grundy was there twinning with his mates but no Jodie Rasburn or her dad and haven’t seen the Yeti in his black 525i at drift practice for a long time now…..

Well JT & Marsh never turned up. 😉 Would of been more of a laugh if they had, well as long as that slag Marsh could control himself. Time flew by and after my 6th session i decided to go, think I might of got another run but needed to get home to walk my little staffie who was feeling a little neglected…….

Surprisingly the Beamer wasn’t that dirty this time. When I got onto the M11 I noticed the temp gauge was creeping up, f`ing bollocks, it was nearly up at 3/4 before I pulled over to let her cool down a bit, looks like the thermostat isn’t opening fully!

Another job to add to the list of things to do before Lydden Hill & I’m a bit concerned about the clutch, which has been slipping now & then, only 6 months old, hmmm!