Crazy Drifting at Lydden Hill. I thought Norfolk Arena Drift Practice was drifting fun at it’s best and it was great fun but this one at Lydden may of topped Norfolk Arena.
It was an eventful day to say the least……

It was a wet start at Lydden on the 26th of April but I was sure it was going to brighten up as the day went on! Had some wet sessions in the morning with my Blister Caz, which was great apart from not getting a full lap……drifters spinning of every damned where….

My bruv & Karen arrived around 11’ish. Got a text from Stel to say that she was on her way with a BBQ 😉 Things were looking brighter already!!! 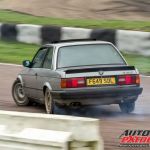 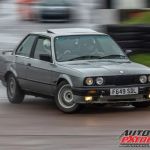 Lunch Time was upon us and Stel had just arrived with the burgers & buns along with Chris & Alex. No one else coming today……M Dirt is yet to come to Lydden, never know, might suprise me one day, Ha, more chance of seeing Santa on the 25th Dec!

As Stel got to cooking, we were approached by a very polite fella, who was asking who owned the E30.

I said it was mine and he said, ahhh you Must be HellBoy! Hehe Indeed I was and he asked if I was a Star Wars fan, well who isn’t? He said his name was Jedi. He had just started drifting with the black e30. Jedi said had seen my videos on YouTube and that I was his protege.

Have to say I was chuffed, my 1st fan who wasn’t a mate or family. We chatted for a while about e30s and set ups for drifting and things. Jedi was training to be an airline pilot in Portugal and was over here for a few months and was just getting into drifting.

Over the Tannoy came an announcement that all drivers were to report to the main building?

At the briefing we all got a bollocking from some angry organisers, for ignoring the yellow and red flags that were been waved during drifting sessions. One of them was f`ing away saying he had never seen such bad driving on track and wanted to send 70% of us home!

It was all fair enough & for the rest if the day all fellow drifters were behaving and taking notice of the flags….

With lunch time over it was time for Karen’s 1st passenger ride 😉 Well, what can I say, my worst damned run ever…… spun of on nearly every corner & then ended up beached in the gravel coming onto the start finish straight from Paddock bend.

I believe Karen was relieved as she thought that it was all over……
Ohhh no, not yet, hehe. Here comes the tow truck, to drag us out and carry on 🙂 I would say Karen enjoyed her 1st time drifting & I think I can safely say she was lost for words for once! 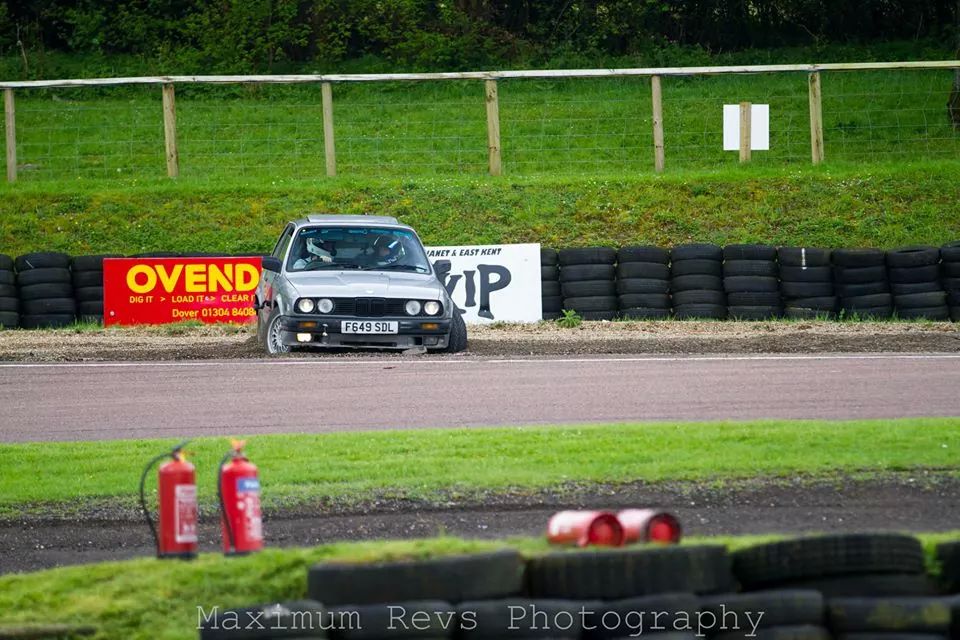 Alex was up next and this run was much the same, Stop and Go drifting with all the spiners but after a few laps, coming into Paddock Bend I cut the corner too soon and clipped the curb which put us up onto 2 wheels! I felt the Beemer lifting but didn’t realise how high up it had come.

As the car touched back down on to its 4 wheels the back was still coming around and the momentum was still taking us over the curb onto the grass, I just eased on the gas to drive over the banking which dropped down quite steeply onto the rallycross track. 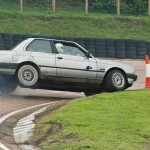 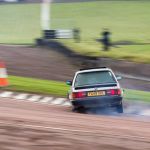 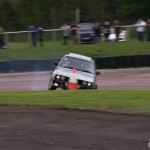 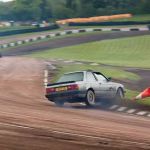 Well we managed to survive that unscathed, fair to say Karen would of been screaming like a little girl but Alex seemed to be calm enough and we carried on. This session was back to Stop & Go drifting with people spinning of here & there 🙁

Checked the beamer over in the pits. The front lower valance was well pushed in, both fog lights busted and my homemade Sump guard had done its job and saved the sump although it was badly bent and twisted……bit of time with a big bar, hammer and Jack and it was good enough to go for more!

Stellas turn next and the dramas continued. Around the 4th lap coming out of the fast Chessons Drift corner and we slammed into the barrier pretty damn hard…..shiiiittt, I was seeing stars for a bit & was pretty pissed of as my Drift Ghost Camera was on the door and got crushed, swinging about for the rest of the session.

The car felt a little different now but we carried on and had some laughs about it after, it wasn’t too bad, could of been a lot worse and at least I could carry on! 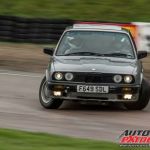 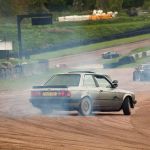 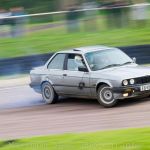 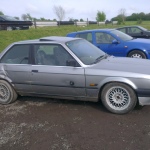 Next it was Chris in for a run. As I said, the car didn’t feel the same after slamming into the barrier and coming around Devils Elbow the steering kept sticking near full lock causing the Beamer to spin out…..carried on regardless and burned through another set of tyres but still no popping tyres.

Costly times…..got some panel damage to the drivers side, you could see the paint and grooves from the barrier all along the side, busted Drift Ghost HD Action Camera & mount, f`ing memory card got cracked so didnt even get the footage 🙁 bent track control arm, 2 busted fog lights…. 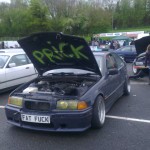 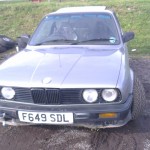 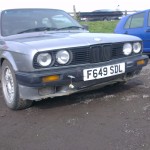 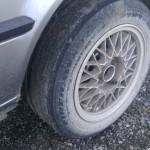 Gotta say that was an eventful drifting session today, got me thinking I need to be getting a trailer, roll cage, harnesses and more Power…V8 Power! I was still buzzing from the day on the way home and most importantly we all had Fun and a great day drifting!

Next event and after some repairs, we would be at King of the Ring the 2nd Chapter, the 17th May 2014 for more drifting!