Drift Practice Gone Wrong at Arena Essex…….What a shit f`ing drift practice this turned out to be…….Ever so short and Not so sweet!

Heading up the M11 towards Arena Essex with no traffic, arrived in no time at all. Signed in, paid up & went down to the pits. Taped up the lights, got the GoPro ready & queued up!

Time now for some drifting, drifting, drifting fun! Was having a great time & then on the last lap I spun of onto the dirt. As I rejoined the track, there was a massive bang, followed by loud banging and rattling…….not good……not good at all.

There was a dip in the dirt and the underneath of the car hit the f`ing Curb!

As I came up to the corner i just knew it had to be the sump that was fucked up! Oil light came on, Bollocks, I killed the engine & coasted around to the exit, all I could hear was metal scrapping,grinding, banging & clanging on the tarmac!

Got that horrible sinking feeling, oh yes, my drifting fun was over for today……. 🙁

Got to the pit exit & the marshall said I think your gearbox is gone mate, its fucked (Yeah cheers) before giving me a big push down the slope to the pits!

Coasting down the slope, I was cursing away to myself…… could hear chunks of the engine falling off, big bits, small bits, damn it!

Finally come to a stop, time to see how bad it was? Jacked her up & looked underneath, oil every where, half the sump missing & the oil pick up ripped off! 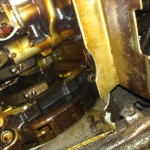 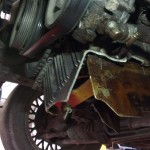 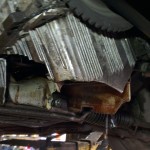 How I wished I had a sump guard fitted……. another job that had been on my list of many things to do……Hindsight what a damned bitch!

Now What! I still had to get me & the Beamer home! Nearest mate would be Marsh….. called him & after quite a bit of piss taking he said he was still at work for another 40 mins.

Fair enough, so an hour an a half later, Marsh called to say he would be another hour….ok, another hour and he said another 20mins, damn.

By this time Drift practice was coming to an end and everyone was going. I asked the lovely young pit lady what time they shut the gates as I was waiting for a mate to get me, she said not to worry, they would be open for ages.

After another while sitting alone in the cold, in the dark by myself, Marsh finally arrived, doing a big handbrake skid, nice! We hooked up the tow rope and were of.

Now I appreciated the tow but lets just say that many people would consider Marsh to be a bit of a nutter….. Ive known him for a long time & I know for a fact that he is just mentally deranged, oh yeah!

He said he would tow me back to his house, 20 minutes away and to follow him, haha!

I couldn’t see my speedo as the bulb had gone but all I could see was the bottom of the bumper of his 120TDi BMW, lets just say we only got overtaken by one car when we moved out of the fast lane to let this car pass!

Got to his in no time & parked my Beamer around the corner from his house, outside some very posh looking houses, I’m sure they would be happy in the morning to see a dirty, oil dripping, untaxed (tax in post) battered e30 sitting there!

Marsh gave me his Beamer to get home in & as it turns out he was towing me at 90mph+, oh yes, I told you he was mental, although he has the cheek to call me mental, right o!

Then on the weekend he towed me back to the garage with his Transit at a more sensible 80mph. Thanks fella, really appreciated. 😉