King of the Ring the 1st chapter of 2014, on the 5th of April! This year there had been a big build up to this event on facebook over the past few weeks. Will it live up to the hype?

Giving the Beamer a quick check over before going & seen that one of the rear brake discs had a few cracks in it………..was meant to change the discs & pads last week but never got around to doing it. 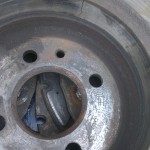 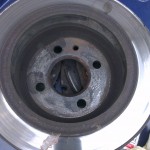 Good job I had the new discs & pads, the old ones wouldn’t have held together, that’s for sure! Quickly fitted them While Marsh thought he would start defacing the Bimmer!!!

F`ing slag not only stuck duct tape all over the bonnet but then sprayed grease on it so I couldn’t peel it of, well two can play at that game! 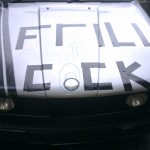 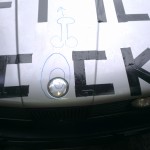 Karma can be a bitch fella 😉 Hahaha….. 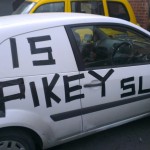 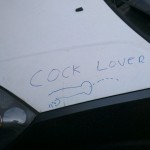 You love it slag…. 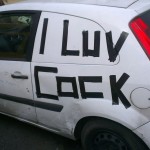 Well its fair to say that Marsh didn’t like the new go faster stripes……..not long before I started getting the abusive & threatening text messages, Miram the slag had sent him the pics! Hehe but he never came to King of the Ring. Result.

Went home for a little siesta and a bite to eat, before heading of to KOTR.

Got there about half 5, taped up the lights & set up the GoPro. Kotr was looking good, not too many people here yet so should get plenty runs before the qualifying.

A lot of my mates were meant to be going to kotr but in the end it was only Lee that turned up……after a while he managed to get a wrist band for the passenger seat. It was Lees 1st time and I’m pretty sure he enjoyed it.

After some promising practice runs, it was now qualifying time……Had a few spins in the qualifying runs but done pretty good 🙂

Still had a great time and stayed until 11 before leaving, I was just too tired from the Go karts the evening before.

The GoKarting was at Rye House with 11 mates, most of them slags threatening to take me out as Marsh had put a £200 bounty on my head, the Tosser!

Well out on the track and the bullshit stopped. I had a few bumps & scrapes, mostly from Marsh & Sean but managed to finish 2nd and was Injury free 😉 Haha, Result! Although Tom, who had been karting from a young age & knew Rye House well, beat us all too easily the dirt bag!

Next week I would be hopefully be heading out to Norfolk Arena in Kings Lynn for some more drifting fun? At the moment it is fully booked, so waiting for some good news from Hilary `Minnie` Collins for last minute cancellations to get a drive, fingers crossed……