You cannot not be impressed with Blocks driving skills, here in gymkhana 9 we have another one of Kens insane tire shredding, smoke filled videos!

Using & abusing his 600bhp powered Ford Focus RS that he was currently using in this years 2016 World Rallycross Championship.

Filmed at an abandoned industrial estate in Buffalo New York City, this isn’t as exotic as his recent videos like Los Angeles or Dhubia but Gymkhana 9 more then makes up for it with his insane driving.

Here we have it Ken Block Gymkhana 9, Enjoy!

Top Gear sum it up with this interview with the man himself.

So, even after nearly a decade of self-confessed tyre slaying around the world, there’s obviously still a palpable online audience. All keen to soak up and feast on amazing visuals, incredible driving and a complete disregard of tyre sympathy. We have to admit, we’re guilty of being one of them.

Ken Bock originally intended to film the video in Australia but for reasons unknown the location was moved to New York. 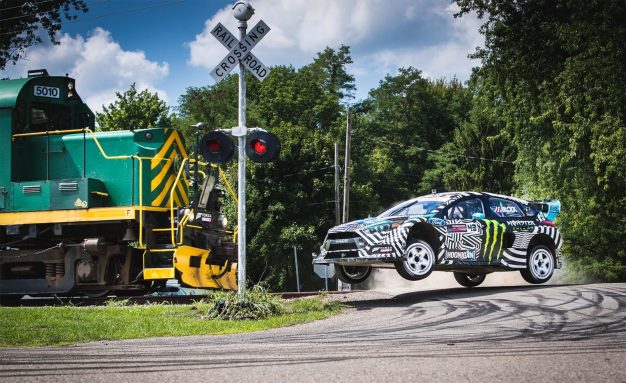 Some of you may be wondering were his Monster tyre smoking Mustang is?

Well the Hoonigan Mustang has some time off. To prepare it for a special Hoonigan performance at Pikes Peak in the summer of 2017.

You can check this preview to get you hyped up for this sure to be Great Hoonigan video entitled Climbkhana ????