Drift Practice at Lydden Hill, 15th Feb 2014. Arrived at 9:15am ……a little later then planned. Parked up in the pits & opposite me was Peter Green in his V8 powered E30 beast! I would have to have a chat with him later but 1st thing was 1st, had to go sign in.

Went down to the office where there was no queue, result! Sometimes it works out better been a little late 😉 The lovely young lady signed me in & gave me my wrist band & Orange sticker for the Novice Inter group & unlike last time on the reserve list I wouldn’t have to keep going back to check if i could drift again, woo hoo!

I had missed the 1st session, hmmm at times been late isn’t so good! Not to worry I had another 5 sessions to go!

Time to unload my tools, my tyres & check the tyre pressures. All the pressures were low even the fronts? So spent about 20mins pumping them up!

What I hadn’t realised, is that the gauge on the pump was set to Bar & not Psi……so now they were really pumped!!!

Then a familiar face approached me, it was Christian Freed. Met him through ebay when I was getting the M52 328i lump for my E30 swap, he was in the process of fitting the mighty M62 V8 to his E30!

He was selling the complete kit but I never won the bet but Christian had been a great help with tips & advice when I was fitting the M52 lump, although I wished I went the V8 route, still might do the V8, soon, very soon…… You just cant beat that V8 rumble & power!

Chris had driven down with Peter Green & introduced me. It was great to meet them both. We chatted for a bit about set ups & drifting before my 1st run.

The 2nd Session was called out over the tannoy & this time I was ready for it. Big M (Marcus) turned up but would have to have passenger ride on the next session!

Out for my 1st run & What can I say….wow, that higher ratio diff made such a difference! Spinning up so much better in 3rd gear now, although the track was damp!

Had a couple spins but no big dramas & the Novice/Inter group was so much better, a few people spinning of but the session kept flowing with no stoppages or red flags.

I felt so much happier with the Beamer & couldn’t wait to get out for the next run.

Back in the pits & there were several announcements over the Tannoy for a drivers briefing! Everybody went down to the meeting area! All the Organisers & marshalls were there & they didn’t look happy!

The Chief marshall started by saying that not one of them were happy with the standard of driving, drifting out on track…….He was proper mad, swearing and saying he wanted to send 50% of us home and he was well pissed of about people ripping up the grass, ooops, sorry Lydden Hill, wont happen again! 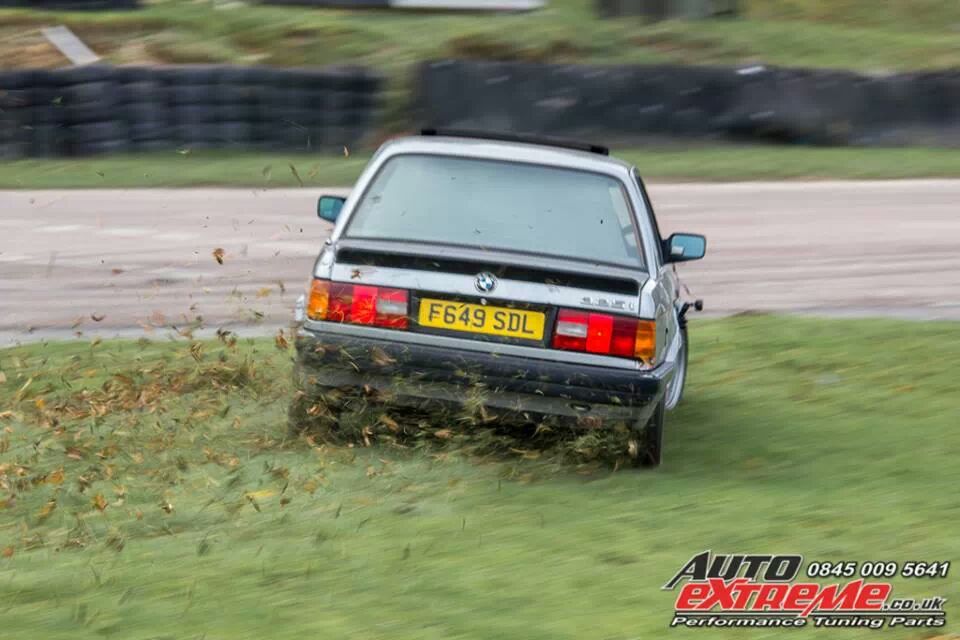 Well, that bollocking seemed to of done the trick with every one behaving on track for the rest of the afternoon!

Back to the pits and wasn’t long before the 3rd session was been called out. Me & Big m drove down to the grid to wait for the all go signal!

We were of & the track was starting to dry up. Time for some smokey drifting, well a little smoke….

Had a better run this time & was pleased with my progress, even big M seemed relaxed this time, although I seen him have Restless Leg Syndrome a couple times, hehehe.

Returned to the pits & seen Christian & Peter again, they suggested using 50 or 60psi in the tyres…… of I went to pump them up! Damn pressure gauge wasn’t working!

Removed it from the pump & put it back in, ahh its working again….tyre pressure 69psi, wtf, I only put 40 in??

That is when i realised the gauge was on Bar before, ah ha…….so just brought the pressures down to 52psi.

Anyhow It was now Lunch time, so me & Marc went to grab a cuppa T & a dirty burger, then the sky’s turned dark & the heavens opened up, it lashed down for a bout 10mins before the sun reappeared.

Dan Grundy in his e36 aka, King of the Ring & Danny Nevvile in his Supra from Arena Essex were here having fun as well…….

Nearly missed the 4th session & had to rush down to get out on track, thumbling about trying to put our helmets on & get the action cams up & running, then I noticed the throttle pedal felt lower, hmmm…… but carried on regardless!.

Waited for a gap on the track & we were of like a bat out of hell! Something wasn’t quite right, foot to the floor & a few times it was like I was letting of the gas??

Well on the 2nd lap & my foot went to the floor, f`ing throttle cable had snapped or come of?

Flicked the hazard lights on & coasted down Dover Slope to Devils Elbow where we rolled to a stop! Ohhh shit, not good, not the best place to be stopped…..started slipping the clutch to get a bit of momentum, little by little we were on the move at a snails pace, edging our way up Hairy Hill.

After a minute or so we were of the drifting line & the tow truck was on route. When he pulled up I jumped out & asked if I could see if the throttle cable had popped of but the man said sorry I would have to be towed of & asked where I was in the pits….fair enough!

Got back & was unhooked & he was off. Opened the bonnet & the cable was still attached, checked the throttle pedal & there was the cable….broke…..damn!

Well that was it for the day, no more drifting the beamer 🙁

Hmmmm, now time for some bodgery. Found 2 pieces of electric cable & knotted them together with the throttle cable and a few cable tyes, then wrapped it with gaffer tape to stop it undoing. Run it through the passenger window & had to operate it with my left hand!

Watched a couple drift sessions with Big M but decided it was time to go before any traffic built up as the M2 was closed due to fallen trees!

What a f`ing nightmare journey…….normally takes about an hour but it was over 3 & a half hours to get home! With a hand operated throttle cable, easier said then done, I can tell you!

Got home without incident but my fingers were pretty damn sore after that journey, I kid you not!

Overall it was a great day apart from the early departure. Next Drift practice at Lydden Hill is on the 22nd of March, hopefully I will get to do a full tyre smoking day of drifting then…………